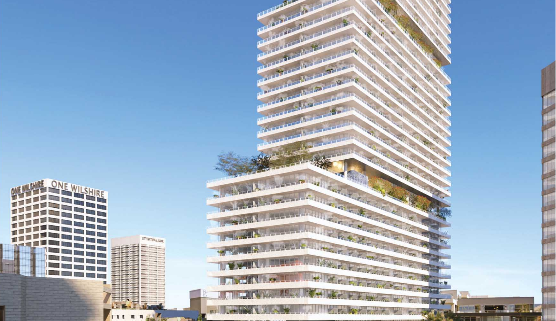 A 45-story tower in the Financial District from Mitsui Fudosan America, the U.S. arm of the Japanese developer, has taken a step forward with the publication this month of the project’s initial environmental study. The documents show a significant redesign.

“I think we’re one of the tallest buildings in the Arts District,” Ryan Afari said on a cloudy weekday afternoon.

Afari made the comment while standing on the rooftop deck of the Walnut Building. He pointed to the Toy and Biscuit Company lofts a few blocks away, the two structures that kicked off the Arts District residential boom more than a decade ago.

The Walnut Building is the latest project from developer the Hillcrest Company, which previously tackled Downtown endeavors including the Chapman Lofts in the Historic Core and the Commodore Building in City West. Like its Arts District neighbors, the Walnut is an aged commercial structure that has been turned into housing. The exterior has been fully restored, and the rooftop refashioned to provide a deck with a sweeping view.

The Continental Building, one of Downtown Los Angeles’ first high-rise structures as well as the first old building to be turned into modern housing as part of the Downtown adaptive reuse craze, is getting ready for another change: It will become a hotel. Documents filed last week with the Department of City Planning detail plans to convert the 12-story building at 408 S. Spring St. into a 140-room boutique hotel.

Outside of the Upper Haight, you can’t get much higher in San Francisco than the 61st floor of the Salesforce Tower—aka the Ohana Floor—the very top of the city’s tallest tower. END_OF_DOCUMENT_TOKEN_TO_BE_REPLACED

The Budokan of Los Angeles would rise at 237-249 S. Los Angeles St. and include a two-court gymnasium. There would also be a rooftop terrace, outdoor event space and community rooms. The complex will host volleyball and basketball games, as well as martial arts lessons and tournament and other activities, said fundraising director Mike Murase.

A groundbreaking for the 63,000-square-foot project is scheduled for next year. Photo by Little Tokyo Service Center

The city in early June selected Los Angeles-based landscape architect Mia Lehrer + Associates to design the First and Broadway Park. The project is now in the final design process. The firm’s vision features a large hardscape plaza as its heart, rather than the flat grass seen in the adjacent Grand Park.

The new park would be anchored by a two-level structure on the northwest corner of the property with a scooped-out amphitheater, with seating underneath the overhang of a “floating” second floor; the second level would likely hold a restaurant.

The north side of the building would have space for a cafe or small store. The design includes a small rock-paved path along Spring Street, as well as some tulip-shaped shade structures scattered around the plaza.

The park is estimated to cost $28 million. According to 14th District City Councilman José Huizar’s office, the councilman since 2013 has secured nearly $21 million in Quimby funds, which are charged to housing developers for park creation, site acquisition, land preparation, design and construction.

The city Department of Recreation and Parks has identified another $3.65 million for the development. Photo by Mia Lehrer + Associates

ROW DTLA: Developer Atlas Capital bought the 30-acre, seven-building complex at Seventh and Alameda streets in 2014 and is now working on building new infrastructure and renovating the interior spaces. There is no firm timeline for when creative office, retail and restaurants would debut.

The plan for the complex now known as Row DTLA is to create 1.3 million square feet of creative office space, approximately 100 stores, more than 20 restaurants, and spaces for community gatherings and public events. The complex, known to many as the home of American Apparel, would have themed streets: “Market Row” would run along a pair of 70,000-square-foot, two-story buildings that would hold office tenants. It would be adjacent to “The End,” a public square, while nearby “Dock Street” would focus on dining options. “The Narrows” would offer cultural and entertainment-leaning storefronts, while “Center Street” would host an open-air produce market.

No budget has been revealed. Photo by Row DTLA

The large podium of the Circa project, at 1200 S. Figueroa St. in South Park, continues to rise. The project from a development group composed of Hankey Investment Company, Jamison Services, Falcon California Investments and Highlands Capital will create twin 36-story towers with a combined 648 condominiums, sitting on top of a seven-story retail podium with 48,000 square feet of space.

The complex will have 1,770 parking spots. Additional features at the approximately $500 million South Park development, designed by architecture firm Harley Ellis Devereaux, include a two-acre outdoor amenity deck and a 15,000-square-foot ribbon of LED signage along Figueroa. Circa is slated for completion in early 2018.

The opening of Sonny Astani’s $60 million Valencia has been pushed back from June to the end of the year. A spokesperson for Astani said a temporary certificate of occupancy is expected by November, although applications to rent the 218 City West apartments are now being accepted.

The six-story project at 1515 Wilshire Blvd. will offer studio to two-bedroom residences that start at 626 square feet. Killefer Flammang Architects is handling the designs for the project with nine-foot ceilings. Amenities include in-unit laundry facilities. The project will also offer barbeque areas, a pool, spa, fitness center and billiards room. There is underground parking and 244 bicycle spaces.

Pre-leasing is underway at OLiVE DTLA, the first building in Sonny Astani’s two-stage South Park development to come online (the other is G12). The seven-story project at Pico Boulevard and Olive Street is nearly complete.

The 293 studio to two-bedroom units range from 440-1,368 square feet; most apartments have balconies, and rents begin at about $1,900. Amenities include a fourth-floor pool deck, fitness area and lounge. Move-ins are expected to begin in October. Photo by Gary Leonard